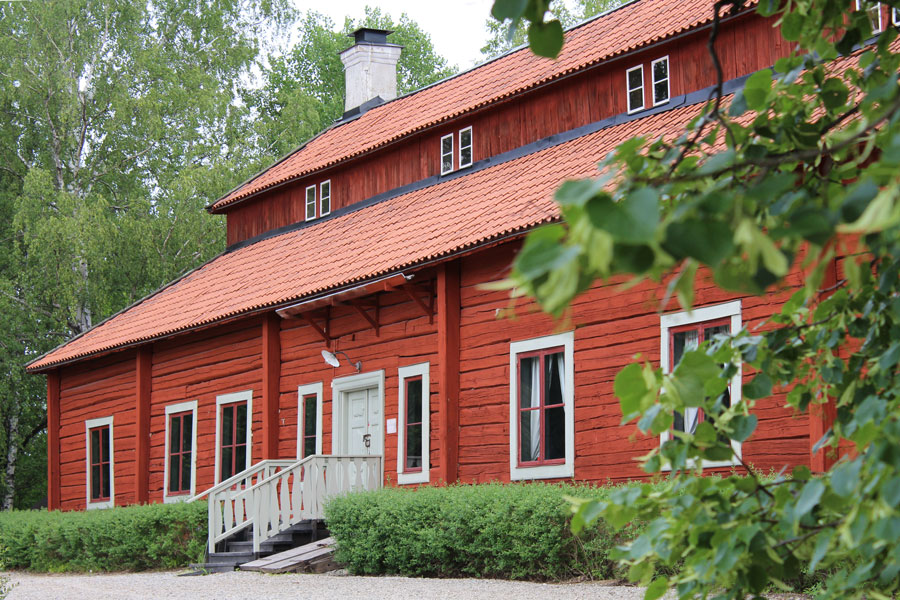 The Museum’s country estate, or manor, consists of three buildings and their surroundings. An allée of lime (European linden) trees leads to the manor house. Behind the manor house in the English landscape garden is a round outhouse. Further down the hill is a gazebo.

Industries that developed in the 1600s were usually situated near an agricultural village. One of these is Hallsta kopparhammare (Hallsta Copper Works), founded and constructed in 1638.

Stricher and his wife Margareta Biörn built a new, more modern residence. It is a Carolinian building 34 metres long and 10 metres wide. Its roof is topped by a long rectangular cupola.

In addition to the copper works, a forge and a sawmill were also located on the factory site along with a farm with arable and pasture land, a hop-garden and fruit trees, and forestland. Journeymen, apprentices and factory maids worked at the copper works. Housemaids and a female cook worked at the residence. Many other people were employed to take care of the farm and to manage the forest.

The Gazebo and the Outhouse

The gazebo was a part of Gideonsberg Manor built in 1850 in Västerås for the grain dealer Adolf Moberg. The manor was demolished in the 1940s and the gazebo moved here to The Museum.

A Name Day was a day of the year that was associated with a certain name. People with that name often used the day as an occasion to celebrate. Moberg’s wife Karin held ‘Name Day’ parties every year in the gazebo on the Name Day for Karin, August 2.

The round outhouse is from the Bernsborg neighbourhood in Blåsbo in Västerås. The outhouse, or ‘house of secrets’ as it was also called, is a two holer.