A farm ‘family’ included the farmer, the farmer’s wife, their children, maids, farmhands and the elderly former owners of the farmstead who were usually the farmer’s parents or his in-laws. Everyone had assigned tasks that varied according to the season of the year.

Women mainly did tasks close to home – everything from care of livestock to food preparation to cloth-making. Women might also work in the fields as needed, for example, during harvest time. Men mainly worked away from home in the fields, meadows and forest. Men were also responsible for the horses, which were usually work animals. Children were put to work at a young age. By age seven, girls followed women and boys followed men to work. Elderly people helped as much as they could. They were often childminders who looked after young children. Maids and farmhands both lived and worked on the farmstead. 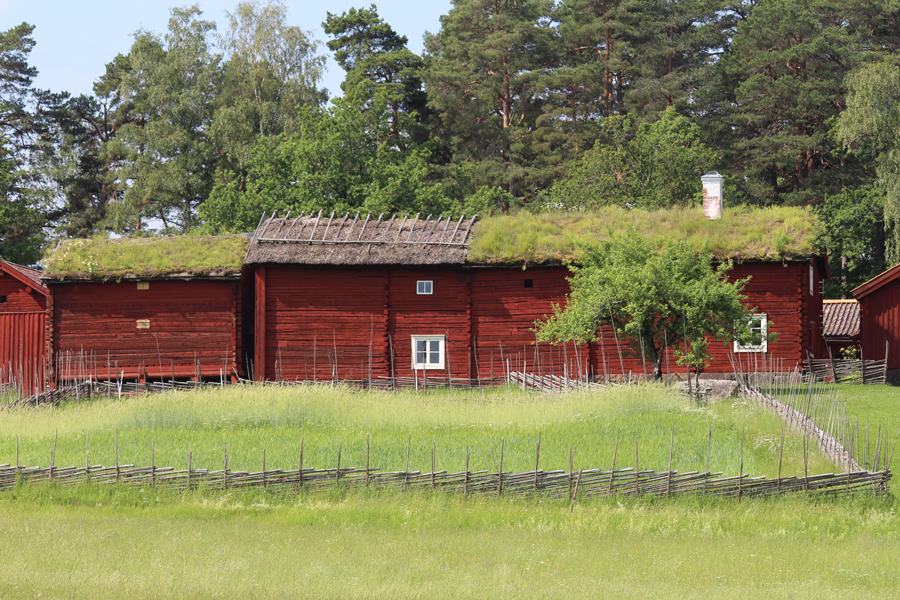 This is where the family lived. The house has two large rooms, an entrance hall and living quarters. It comes from Norrsylta in Munktorp Parish. In front of the house around the foundation is a bank of soil that helped insulate the building during winter. In the summer it was a small garden where, among other things, medicinal plants and tobacco were grown for household use.

This is where the elderly former owners of the farmstead lived.

The building next to the in-laws cottage houses the mangle and the brewery. This building was used for brewing beer, washing clothes and slaughtering small animals. The open doorway was used as a visitor’s stable and on the upper level was a guestroom for visitors. On the side of the building was a weaving room, which now houses an exhibit about the farmstead.

On the lower level are a bakery, a pantry, and a storeroom for tools that were used in textile production. There is also a carpenter’s workshop. There is a long balcony along the upper level where servants lived. Maids and farmhands often slept in the farmhouse during winter and in the loft during summer.

This is where grain was stored. The grain barn has a raised foundation to protect the grain from rats and mice.

A stable separates the front yard from the farmyard. It has an opening that leads to the farmyard. The stable housed the farmstead’s horses.
The barn was used at threshing time. Hay, straw and grain were also stored here. The cow barn is situated on the other side of the farmyard. This is where cows were kept. Hens, geese and rabbits live there now. The pigsty housed the farmstead’s pigs. Between the grain barn and the cow barn is a henhouse for roosting hens and their chicks.

The forge is situated outside the farmstead. Almost every farmstead had a forge where simple implements could be made and tools repaired. The forge was often situated away from the farmstead to minimize the danger of fire. The blacksmith’s workstation is situated in front of the forge. Oxen were brought here when they needed new shoes. Before shoeing, their hooves were clipped. They were then shod to prevent wear and tear on the hooves. Oxen were used as work animals on the farmstead.

Another grain barn is situated below the farmstead on the hill.

Farther down the hill are cropland, pastureland and meadows that belong to the farmstead. Various types of grain were grown on the cropland. In the meadows, hay was harvested for fodder during the winter. The farmstead also had a small forest that provided lumber for building and firewood for cooking and heating.