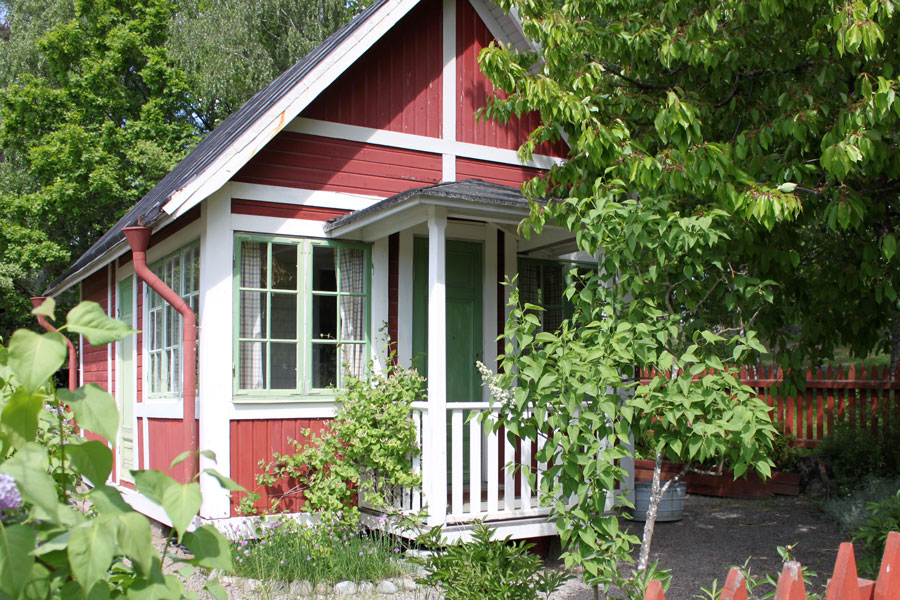 The allotment-garden cottage shows how an allotment might have looked during the 1950s. The cottage was previously situated in Åsgatan (Ridge Street) in Västerås, and was acquired by the Museum in 2000.

As early as the late 1800s, there were allotment-gardens in Sweden. The purpose of allotment-garden areas was to provide places where the urban working class could grow its own food and get away from the city for fresh air, peace and rest. It was thought that workers who might otherwise go to the pub and drink in their free time should make themselves useful by cultivating allotment-gardens instead.

The first allotment-garden area in Västerås was established in 1909. There were 64 allotments that could be rented and cultivated.

At first, the cottages were simple and constructed of salvaged material. Mostly potatoes and beans were grown. Later, and more and more often, decorative plants were cultivated, grass lawns were sown and bigger and better cottages were built.

In the 1950s, grass lawns became popular – new grass varieties were sowned and lawnmowers were common. The cultivation of useful plants declined and the allotment became more a place to relax.

The plants in this garden were collected by the Museum mostly from Åsgatan in Västerås where the cottage was previously situated. These include decorative plants and bushes such as lilacs, peonies, a Red-leaved rose, Virginia creeper, orpine and day lilies, and berry bushes such as blackcurrant, whitecurrant, gooseberry and raspberry. Potatoes, broad beans, dill, parsley, Swedish turnips and beets, among other things, were grown in the vegetable garden.

The interior of the cottage represents the 1950s. There is a glass-enclosed veranda with a chair and table. On the table is a transistor radio. In the cottage’s main room, which also functions as a kitchen, there is a counter, a two-burner gas hot plate and a closet containing household utensils. There is also a sterilizer and a book about home canning.